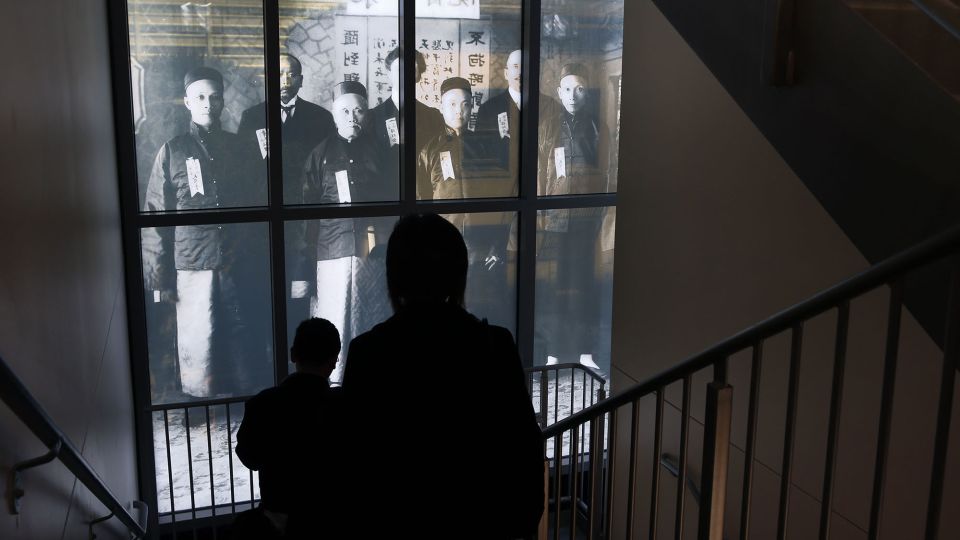 Friday: Despite being a densely populated neighborhood full of vulnerable people, Chinatown was well prepared.

On Thursday, Gov. Gavin Newsom said he had signed an order providing extra paid sick time for workers in the food chain.

“The grocery lines are also the front lines in this pandemic,” he said.

Later in the day, lawmakers dug into the state’s spending on its coronavirus response, as The Sacramento Bee reported. According to CalMatters, Mr. Newsom’s free-flowing spending has been facing scrutiny.

Today, we have another dispatch from our partners at the University of California, Berkeley Graduate School of Journalism, written by Alyson Stamos and Meiying Wu:

SAN FRANCISCO — On Jan. 24, the eve of the Chinese New Year, Dr. Jian Zhang, the chief executive of San Francisco’s Chinese Hospital, saw an alarming photograph as she scrolled through her holiday greetings on WeChat. An old medical school colleague was about to join more than 100 other health care providers being rushed to Wuhan to help manage the coronavirus outbreak.

“Twelve hours,” she recalled thinking. “We have direct flights from Wuhan to San Francisco, and it only takes 12 hours.” She knew those who were visiting family in China during the Lunar New Year would soon be back.

A perfect storm seemed to be headed for the 22 square blocks that make up Chinatown, one of the most densely populated neighborhoods in the United States. Chinese Hospital, which Dr. Zhang has led since 2017, is an acute care facility in the heart of Chinatown. Many of the neighborhood’s older Chinese residents live in cramped single-room-occupancy hotels. Travel between Chinatown and China is constant.

Dr. Zhang called Aaron Peskin, a San Francisco supervisor who represents Chinatown. “If we have an outbreak in Chinatown,” she told him, “it will be a nightmare of yours and mine.’’

But Chinatown has thus far held off the nightmare.

Chinese Hospital admitted its first Covid-19 patient on March 26, three weeks after patients had been hospitalized in other parts of San Francisco. As of mid-April, at least 34 cases of Covid-19 had been detected in 22 S.R.O.s around San Francisco, according to figures collected by Mr. Peskin’s office. None of these cases were within those 22 square blocks, although three were on the border of Chinatown.

“It’s kind of amazing,” Mr. Peskin said. “Here we are — it is now the beginning of April, and Chinatown, knock on wood, is looking pretty darn good.”

Despite being particularly vulnerable to the novel coronavirus in the United States, Chinatown turned out to be well-prepared, unlike other places around the country. Chinese Hospital was at the center of an effort to coordinate barriers for entry of the virus. These involved almost every major institution in Chinatown, including the Chinese-language press and deeply engaged neighborhood institutions, all of whom were imprinted with memories of earlier infectious disease outbreaks. Deep links to front-line health workers in China would also be invaluable as Chinese Hospital worked to avoid what everyone thought was coming.

Given the unpredictable pathways of this highly contagious disease, Dr. Zhang and other leaders in Chinatown are well aware that circumstances could change in an instant. Compliance with shelter in place has at times been haphazard. (Mr. Peskin’s office has fielded many complaints about card games in Chinatown’s Portsmouth Square.) But the successes so far can be traced to early action by hospital and community leaders to keep the virus out of areas where it might otherwise flourish.

On Feb. 1, one week after Chinese New Year, Dr. Zhang, Mr. Peskin and Chinatown community leaders hosted a news conference highlighting practices to slow the spread of the virus. The Chinese Consul General in San Francisco gave an update on the Chinese government’s response.

Mr. Peskin saw the effects of this informal campaign every day when he drove through Chinatown on his way to City Hall. “For a while it was kind of startling that on one side, on the north side of Broadway, everything was ‘normal’ and nobody was wearing masks,” he said. “And the second you would cross Broadway into Chinatown, everybody was wearing masks.”

Nonetheless, the perception of Chinatown as a potent hotbed of the coronavirus quickly took hold. In February, well before a single Covid-19 case had been detected in San Francisco, tourism in Chinatown evaporated. On Jan. 31, President Trump had announced travel restrictions to and from China, and before long he was referring to “the Chinese virus.” Attacks against Asian-Americans jumped nationwide.

In late February, Speaker Nancy Pelosi returned to her home district of San Francisco and took a high-profile tour of Chinatown, arm in arm with community and business leaders. “Everything is fine here,” she said. “Come, because precautions have been taken.”

Chinese Hospital has played a prominent role in San Francisco’s Chinese community for more than a century. It began as the Tung Wah Dispensary, opening in 1899 to provide health care to Chinese immigrants who were otherwise unable to get treatment because of rampant discrimination. When the 1906 earthquake destroyed the dispensary, Chinese community groups raised money to rebuild what is now known as Chinese Hospital. Today, it remains the only hospital in the United States built by and for the Chinese community. Bruce Lee, the actor and martial arts master, and Norman Yee, the president of the San Francisco board of supervisors, were born there.

Most of the hospital staff is bilingual or trilingual, speaking English, Mandarin and Cantonese. Dr. Roger Eng, chief of radiology, says small details like serving jook, a traditional Chinese rice porridge, to patients for breakfast “does have an impact on their mental well-being which we know helps speed up their recovery.”

Dr. Zhang, 53, left her home in Guangzhou in 1990 to study, and obtained a doctorate in nursing practice at the University of San Francisco. While on clinical rotation at Chinese Hospital, she noticed that many women could not afford cancer screenings; she sought and obtained funding for low-cost mammograms and training in breast self-examinations. She’s been with Chinese Hospital since 1993, and became chief executive in 2017.

One of the hospital’s most effective tools for raising the alarm about the novel coronavirus and getting health information to the community is the city’s Chinese-language media — at least two newspapers, a radio station and two TV stations. A 90-minute community-initiated fund-raiser on Sing Tao Chinese Radio last month raised more than $300,000 for the hospital’s efforts to fight the pandemic.

Dr. Zhang and her colleagues’ continuing links with China also gave them insights from the front lines in Wuhan. Dr. Zhang’s medical school friend who deployed to Wuhan just before Chinese New Year’s ended up running a 51-bed critical care unit. One early idea Dr. Zhang borrowed from her medical colleagues in China was to put masks on every patient before they even set foot inside the hospital to minimize the virus transmission in their wards.

The local Wuhan diaspora has also helped. A longtime friend of Dr. Zhang’s, Hai Su, a software engineer from Wuhan, came to the United States in 2001. He helped organize two Wuhan alumni associations to send thousands of dollars’ worth of medical equipment to their hometown at the height of the crisis. As the epicenter of the pandemic shifted to the United States, the Wuhan alumni refocused their help on the Bay Area. In March and April they donated more than $50,000 to Chinese Hospital in masks and cash.

As of Thursday, only one Covid-19 patient remains at Chinese Hospital. Two others have been discharged. So far in April, the hospital has taken in 18 patients from Zuckerberg San Francisco General Hospital who do not have the coronavirus, helping to open up acute care beds there for those with the virus.

On the streets of Chinatown, about 80 percent of the restaurants are shuttered. Produce markets, fish sellers and butchers are gamely trying to stay solvent with socially distanced shopping in what are often confined spaces. Dr. Zhang does not presume that the hospital’s record thus far will continue. She hopes for the best, prepares for the worst. “Every day that we don’t have a surge is a good day,” she said.