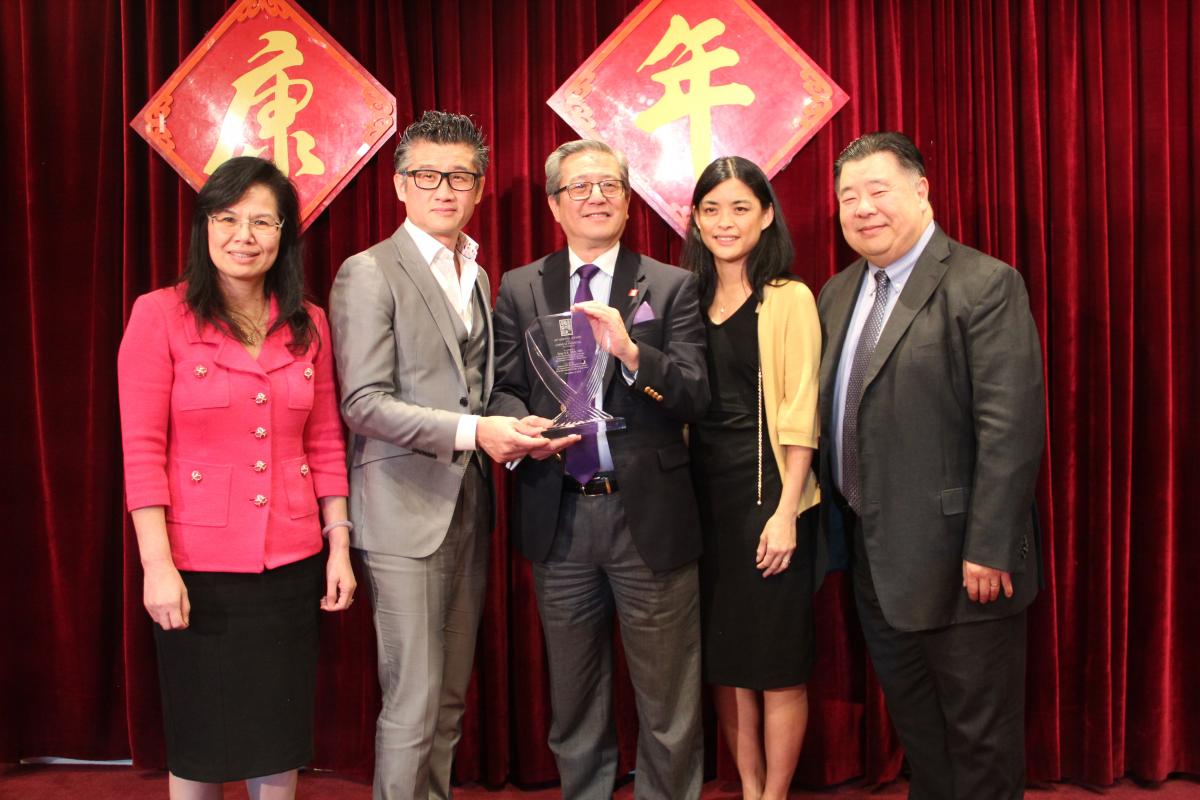 Chinese Hospital held the 44th Annual Award Ceremony on November 13th. Dr. Tony Mok, a renowned leader in the research and treatment of Lung Cancer, is the recipient of this year’s award.

Dr. Mok was trained at the University of Alberta, Canada and he subsequently completed a fellowship in medical oncology at the Princess Margaret Hospital in Canada. After working as a community oncologist in Toronto, Canada for seven years, he returned to Hong Kong in 1996 to pursue an academic career.

Dr. Mok is Li Shu Fan Medical Foundation Named Professor of Clinical Oncology and Chairman of Clinical Oncology at The Chinese University of Hong Kong (Hong Kong). His main research interest focuses on biomarker and molecular targeted therapy in lung cancer. He co-founded the Lung Cancer Research Group, and led a number of important multinational clinical trials, which include the IPASS (IRESSA Pan-Asia Study), a landmark study that established the role of first-line gefitinib in patients with EGFR mutation.

Professor Mok has contributed to over 220 articles in international peer-reviewed journals, including the New England Journal of Medicine, Science, Lancet and Journal of Clinical Oncology, and contributed to multiple editorials and textbooks. He is active and experienced in serving the academic societies. He is now Fellow of American Society of Clinical Oncology (FASCO), Past Chair of the ASCO International Affairs Committee, Treasurer and Past President of the International Association for the Study of Lung Cancer (IASLC), a member of the ASCO Publications Committee and Vice Secretary of the Chinese Society of Clinical Oncology (CSCO).

Dr. Mok is closely affiliated with the oncology community in China, and has received an Honorary Professorship at Guang Dong Province People’s Hospital, Guest Professorship at Peking University School of Oncology, Visiting Professorship at Shanghai Jiao Tong University and West China School of Medicine/West China Hospital, Sichuan University. He is an Associate Editor on Thoracic Oncology for Journal of Clinical Oncology.  He has also authored eight books in Chinese and hosted three television series in Hong Kong.

Since 1973, and every year thereafter, the Board of Trustees, Medical Staff and Continuing Medical Education of Chinese Hospital have sponsored a full-day event to honor an individual for outstanding contributions to healthcare in the Asian American community. The award also serves to raise awareness of important achievements in medical sciences, health education, and community leadership. Past award recipients include: Baruch Blumberg, MD (Nobel Prize recipient for the HepB antigen); David Ho, MD (Man of the Year from Time-Magazine for his research on AIDS); and Professor Lap-Chee TSUI OC, PhD, FRS, FRSC, GBM, GBS, JP (Founding President of the Academy of Sciences of Hong Kong).